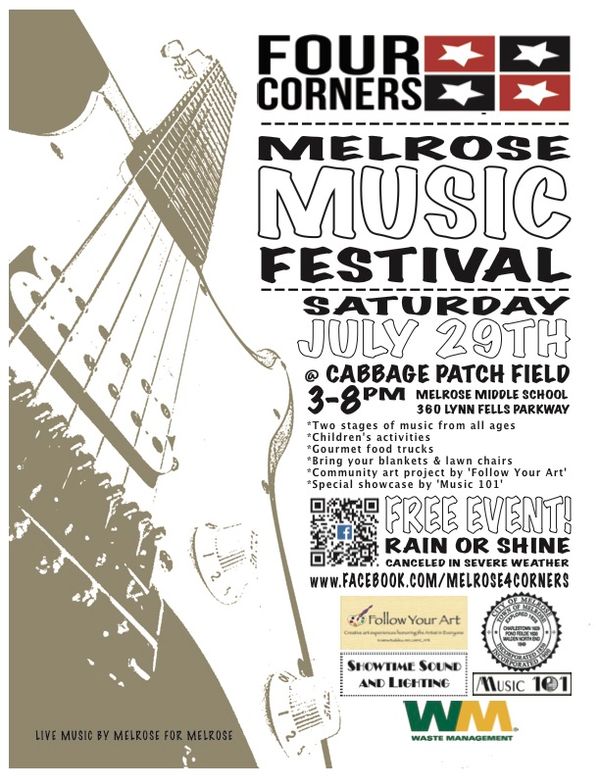 Music, arts and community have always been vibrant in Melrose. Continuing in this tradition, Mayor Dolan and the City of Melrose are excited to announce the Fourth Annual Four Corners Music Festival, which will feature TWO STAGES of local musicians from all age groups. Bands include Bourbon Chasers, Pulse Reunion, Shakey Jake & the Blue Vibrations, Squidhead, and Free Range Chickens.

Starting at 3pm, bring a blanket, lawn chairs, and the family for an awesome evening of music at the Cabbage Patch field in front of the middle school at 360 Lynn Fells Parkway. There will be several fun bands as well as individual performances from talented Melrose residents including a special feature from ‘Music 101’. Event goers can participate with a community art project lead by ‘Follow Your Art’ and Recreation staff will be on hand to play games with kids through the duration of the event.

Gourmet food trucks, Flatbread Pizza, and Cinnamon Shack, will be on site so bring your appetite! This event is a great way to help connect neighborhoods while also further supporting our fine arts community.

Keep up with the event at https://www.facebook.com/melrose4corners/

Live Sound Provided by Melrose based Showtime Sound and Lighting

Squidhead is a local Melrosian group with an old-school punk sound and a progressive rock twist. Influenced by Pink Floyd, the Ramones, Metallica, and Green Day, the band consists of Cole Feely on lead guitar, Jack Tracey vocals and rhythm guitar, Colby Orton on bass and Stephen Flanagan on the drums.

Pulse is a Boston based group formed more than 10 years ago composed of 4 friends and seasoned musicians passionate about Rock. After a good run in the Boston club circuit all members moved on to different projects. The band is getting back together for this one night, one night only performance to rock out Melrose! They’ll be playing classic hits from the 70’s, 80’s, 90’s and today!

Debut performance of the Free Range Chickens. All four band members hail from local Melrose chicken coops. A pure dad band hatched by the desire to get together and jam with our kids and have fun. All applauding encouraged!

Shakey Jake and the Blue Vibrations

Shakey Jake and The Blue Vibrations plays groovy Blues for your dancing pleasure. Shake your booty and stomp your feet. Have a ball y'all!

Music 101 is a private music school located on Upham St. in Melrose, specializing in instruction for Piano, Voice, Guitar, Bass, and Violin. They will be featuring some of their top young students for this year's Four Corners festival.

Diego Winsor is an eighth grader at the Galvin Middle School in Wakefield and he is entering his fourth year of playing the double bass. He plays with the Galvin orchestra, chamber orchestra, and jazz band, along with the Northeast Massachusetts Youth Orchestra.

Lucia Gagliano, who will be a freshman at Melrose High School this year, has been studying piano with Jingjing Zhou since 2010 (with one year off to give cello a try). Lucia's performance will include Beethoven's Sonata in F Minor, 1. Alllegro, Eugenie Rocherolle's Alegrias, and her arrangements of songs from her favorite TV shows, including a medley of the Orphan Black and Stranger Thingsthemes.

From the Lincoln School, Raymond Kochanski, drums, and Sammy McQuaid, guitar/vocals, will perform a cover of “Baby” by Justin Bieber.

From the Winthrop school, Gabe Klapman will be playing a couple tunes on the violin from his Irish and Italian heritage... "Shipping up to Boston", and his new favorite "Funiculi Funnicula" which he learned for a recent trip to Italy!

Sam Chetkin currently goes to MVMMS and has taken guitar for 7 years and vocal lessons for 3 years. He has performed musicals with Melrose Drama and looks forward to performing the title role in the upcoming WYRT production of Shrek in early August. He will be playing a 4-5 song set.

Liana Joy, age 13, has studied piano under Jingjing Zhou for a number of years. Liana's return performance to the Four Corners Fest will include Beethoven's, "Rage Over a Lost Penny," and Burgmuller's, "Ballade."

Country and Rock group, Bourbon Chasers, turn an acoustic trio into a fiery shot of energy and fun. Lead by singer/guitarist, Cam Robbins, they pick from popular country hits, modern and classic, and mix in a lively bunch of familiar rock tunes. Their original music speaks of the same vibe and blends in perfectly with their upbeat sets. With Pete “Gunshot” LaGrange on box and Tim Ko. on lead telecaster, the trio often pull in guest musicians, namely Ethan B. Miller on harp and Katie Delvaux on fiddle.